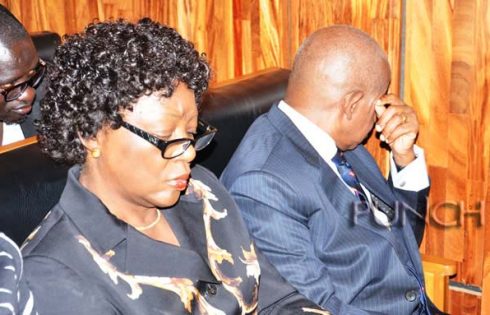 It is not yet over for Justice Adeniyi Ademola and his wife, Mrs. Olabowale Ademola, who have been freshly charged for corruption by the federal government. A third person, Mr. Joe Agi, was also charged along with the couple

Though a High Court of the Federal Capital Territory upheld a no case submission against the suspects, the federal government has appealed the decision.

The fresh charges, according to a source, was in order to bring the accused to book “for living above their means and failure to declare their assets.”

Justice Okeke of the Federal High Court in FCT had, on Wednesday, struck out the 18-count charge preferred against the defendants after holding that the prosecution failed to prove any of the allegations despite the provisions of sections 53 and 60 of the Independent Corrupt Practices and Other Related Offences (ICPC) Act.

The government, through the ministry of justice, has however decided to appeal the ruling. A source said the ruling by the Federal High Court was surprising.

“It is even stranger that the trial was not allowed to continue considering the applicable statutory provisions.

“Of interest is the decision of the learned trial judge that the offence of giving and receiving gratification was not made out by the prosecution against the defendants in the face of the evidence held in court.

“Prosecution witnesses gave testimony of the payment of N30 Million in three tranches by Mr Joe Agi (SAN), into the account of Mrs Olabowale Ademola, the wife of Justice Ademola. Agi was a legal practitioner who actually had cases in the court of Justice Ademola.

“The defendants, however, claimed that the money was a gift from common friends for the benefit of Justice Ademola and Mrs Ademola to support the wedding of their daughter’’, the source narrated.