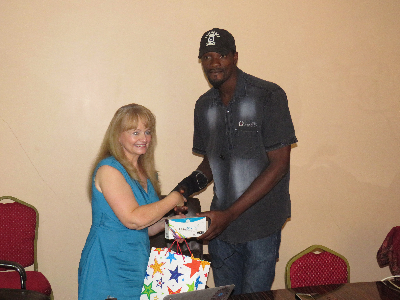 Max International on Monday donated drugs worth of $500 and a cash sum of 50,000 naira to former Kano Pillars Basketball player, Adebayo Adeniyi who was involved in a ghastly auto crash in 2016.

The presentation was done by Rev. Darlene McGregor on behalf of the US based pharmaceutical and Wellness Company to the player whose career came to an abrupt halt following an accident on his way to Lagos from Kano after the 2016 regular season campaign with Kano Pillars in the DSTV men’s basketball league.

According to McGregor, the company’s representative in Nigeria got wind of Adebayo’s condition in the media and felt there was a need to help in any way possible to aid his recovery in line with their company’s policy.

She said it was imperative that the player benefits from the new medical breakthrough technology relatively new in Nigeria.

In his reply, the former Union Bank basketball player thanked Max International and McGregor for their benevolence which is coming as a huge boost for him on his road to recovery.

“This singular act has lifted my spirit and given me a new sense of belief that with the right support ,  I can still bounce back.”

He expressed deep gratitude to Nigerians who have continued to support him through the “Save Adebayoor Godson’s Hand appeal fund” as he used the medium to appeal to other well-meaning individuals to come to his aid in his drive to return to the basketball court.

“I have basically spent all my money on hospital bills, drugs, surgery and physiotherapy.

From the recent medical visit to a specialist, I have been told that I will need to go for another corrective surgery before I can gain full control of my fingers.

Basketball is the only thing I know how to do best and I want to play the game again,” the player passionately appealed.

On his part, a member of the Save Adebayoor Godson’s Hand appeal fund committee, Oni Afolabi thanked Benjamin Peter, a United States of America based Nigerian Doctor and Vice President, Business Development – North America and Africa regions, Max International, for serving as the link between the committee and their partners in Nigeria.

He described the decision of Max International as overwhelming and worthy of emulation.

“Things are looking bright as more people continue to show concern for this noble cause which is fast gaining ground like wild fire.

In the last one week, the committee has been wowed at how much we can achieve as people when we come together with unity of purpose.

We implore more Nigerians to give to this noble cause as the player prepares for a final surgery.” 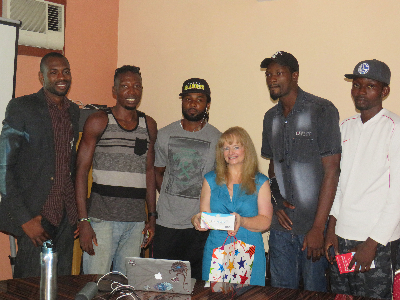