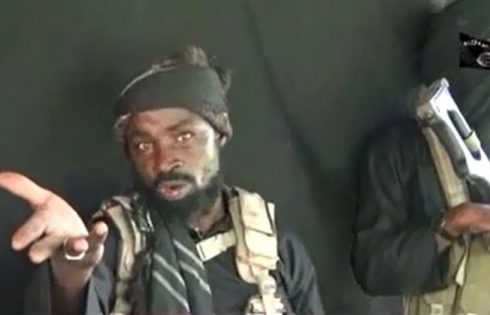 Shekau also refuted claims that the Joint Task Force in Cameroon had killed its members.

In the 27-minute long video released by Shekau, in which he spoke in Hausa and Kanuri, he said that his caliphate was “running smoothly”, adding that Boko Haram was responsible for the suicide bombings in Northeast Nigeria, including an attack in Maiduguri last Wednesday that killed six persons including four suicide bombers.

Shekau, in December 2016, denied claims that the Nigerian military had flushed its members out from the Sambisa forest in Borno State.

Let me speak briefly in Hausa language, Allah’s help towards us made us to continue fighting, our brothers  too fought along Cameroon-Nigerian border. But you kept lying to the people that you have killed 60 of our people, that you succeded in arresting 20 of our men. That you even rescued 5000 of your people.

Why all these lies? Paul Biya why are you lying is this how to convince your masters the whitemen who are pigs and children of monkies.

Lies! Lies every day,  you better be careful Paul Biya because you are not fighting Shekau but God. It would have been easy for you to fight Shekau not God. This thing is beyond your imagination even though you underrated our strength you can not joke with the  holy Quran, prophet’s hadith and the religion of Allah. No! No! No!

By Allah all your deception and lies to Nigerians that you are doing them good will not help you.  Following the steps of America, Britain  or practicing democracy and educating children with Western education will equally not do you good.

I rather not wish you bad but let me urge you to seek Allah’s forgiveness and repentance. Accept the real teaching of the Islam by not only depending on fasting, salat, zakkat (charity) and Hajj (pilgrimage).

It’s not my saying because religion is ideology which is based on practicing the Quran and its laws. I better not make too much talk. Niger Republic President Muhammadu Yusufu you are a liar. You can’t dare my students and if I rise against you it will be difficult for you to face me.

Just remember that as long as we are Muslims and we practice the injunction of the Holy Quran we will be powerful. This is not something you can play with.  Stop saying Boko Haram people are jobless because your propaganda will not help you in the presence of Allah.

This is my warning to you all. By the way, this message was meant for my brothers in Islam  to remind them to remain resilient and dedicated towards the struggle. I assured them that the struggle is not shaken or weakened in anyway.

All the explosions in Maiduguri are carried out by us and we will continue to detonate bombs. In fact, you will never have rest of mind until you accept the holy Quran.