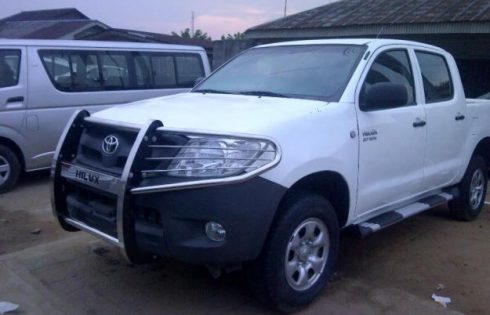 The Nigerian Customs Service has announced seizure of 223 vehicles by the Compliance Task Force set up by Comptroller-General Hammed Ali.

Thirteen of the total car seized are said to belong to a senator from Kano State, according to the Task Force Zonal Commander, Mr. Bala Dole.

Mr. Dole refused to identify the senator but disclosed that the 13 cars were trailed from Maigatari in Jigawa State, noting that they were smuggled into the country.

Twelve of the vehicles were identified as brand new Toyota Hilux, while the thirteenth vehicle was said to be a Toyota Land Cruiser.

“Based on the intelligence report, the vehicles were 30 in number but we were able to trail 13 of them 12 of which were hidden in the senator’s compound.

See also  Half a million people at risk of starvation in north east, says UN

“We sealed the house and retrieved the vehicles and they are now in our custody,” Dole said.

By our reporter/ The United Nations World Food Programme (WFP) has warned that half a million women, men and children in Borno, Yobe and…

By our reporter/ The founder of Citadel Global Community Church (CGCC), pastor Tunde Bakare on Friday said that the zone where the next president…

By our reporter/ Vice President Yemi Osinbajo has challenged states to think out of the box in raising their respective Internally Generated Revenues. Osinbajo…