Chijioke Ezeibekwe, the Pastor who joined his younger siblings in marriage at the Ekwulobia area of Aguata, Anambra state, has explained how God directed him to join the hands of his sister and brother in holy matrimony.

The mathematics teacher in a secondary school in Ekwulobia recently wedded his younger brother Chiadikobi Ezeibekwe and his 17-year-old biological sister.

The wedding took place in Chijioke’s church, who is the priest of Dwelling Fullness of God Church, Agba, Ekwulobia.

Speaking in a video interview with Channels Television, Chijioke insisted that the union was divinely ordained. 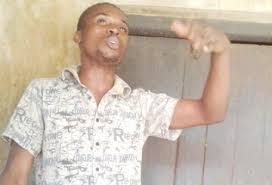 Chijioke the pastor who wedded hid siblings in Anambra

“God took me to about three scripture verses on ‘bone of my bone’ Leah said the same thing when Jacob came to her to marry.

“And the people of Judah told David when he became king that ‘you are bone of our bone.’

“God keeps telling me that the flesh of your flesh and the bone of your bone is your blood. It’s your immediate family.

“One day, He brought out the hand of my sister in the spirit world and said that the one He’s talking about is not for me.

“And he showed me my brother; his colour, fingernails and everything and said, ‘look at the one that will marry her,’ She’s made for him.”