By our reporter| General Ibrahim Attahiru, the Chief of Army Staff,  who died in a plane crash, was not alone on the ill-fated aircraft of the Nigerian Air Force that crashed around 6pm on Friday.

Attahiru and nine other officers died in an air force aircraft that crashed in Kaduna.

The flight crew and other persons on board the ill-fated aircraft are:

The Nigerian Air Force had earlier confirmed that there was an accident involving one of its aircraft in Kaduna but did not go into details. 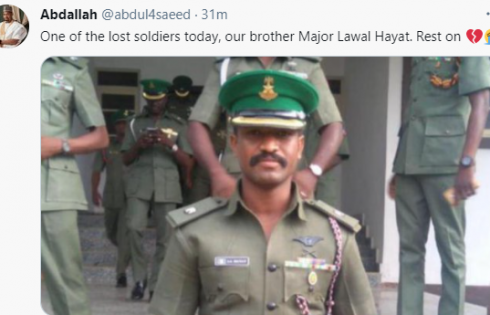 “An air crash involving a @NigAirForce aircraft occurred this evening near the Kaduna International Airport. The immediate cause of the crash is still being ascertained. More details to follow soon,” read the statement signed by Edward Gabkwet, the force’s Director of Public Relations and Information.

“Beachcraft 350. 8 souls on board. Unfortunately all dead,” Olateru wrote in a WhatsApp note.

But information showed that aside the army chief, six other passengers, all military personnel, and four crew members died.

A military source said he and the deceased army chief observed Juma’at prayer in Kaduna shortly before the crash.

“We prayed alongside him in the afternoon. We greeted him, he answered but moved on hastily,” he said.

An airport official said the plane caught fire before it crashed.

“The plane caught fire before it crashed… the weather may have contributed to the crash. It rained terribly in Kaduna today.”

Attahiru was appointed Chief of Army Staff on January 26, 2021.

He commenced cadets training in January 1984 and was commissioned into the rank of Second Lieutenant in December 1986 as an Infantry Officer. He holds a Masters degree in Strategic Management and Policy Studies from the Nigerian Defence Academy.

General Attahiru has held several appointments on the staff, instructional, and in command during his military career. He had a tour of duty with the United Nations in Sierra Leone as a Military Observer, where he facilitated United Kingdom military engagement, Operation BARASS in September 2000.

He was an Operation Officer and later Company Commander in NIBATT 19 ECOMOG Operations in Liberia. Also, he had the unique privilege of having commanded with distinction all through the chain of command in the Nigerian Army.