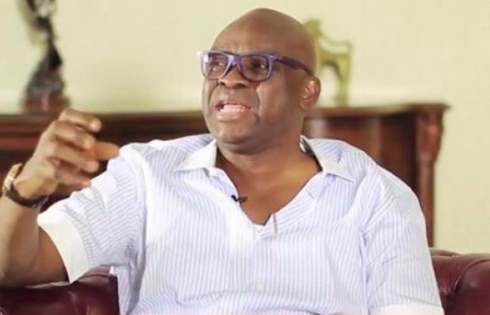 Ekiti State Governor Ayodele Fayose has lashed out again at former President Olusegun Obasanjo. Fayose said in a statement issued by his special assistant on public communications that Obasanjo presided over the most corrupt administration in the history of Nigeria.

Fayose said that while Obasanjo was “eating and sleeping” with corruption under his tenure, he has no moral right to accuse anyone of corruption.

On Saturday, Obasanjo was quoted to have said that Nigerian churches had become corrupt and church governors needed to join the campaign to sanitize the country of corruption. The former president was speaking at the 2017 convention lecture of Victory Life Bible Church International in Abeokuta, Ogun State.

In Fayose’s statement released by Mr. Lere Olayinka, his SA on public communications, he noted that “Obasanjo that I know does not have morals rights to accuse anyone of corruption because he eats and sleeps with corruption.”

“If anyone must accuse the church in Nigeria of promoting corruption, that person cannot be Obasanjo because he presided over the most corrupt government in the history of Nigeria.”

Fayose also insists that Obasanjo should disclose his source of wealth if he wants to keep accusing churches of not disclosing sources of gifts to them.

“Where did Obasanjo get the stupendous wealth he is parading since he was a pauper before he became president?” Fayose asked.

“Where did he get the trillions of naira that he deployed to his failed third term bid? How can Obasanjo, under whose tenure Nigeria witnessed Halliburton scandal be sermonising about corruption? Who introduced politics of Ghana-must-go bags to the national assembly?

“Who was the president when sacks of money were displayed on the floor of the house of representatives, as bribe money given to some reps members to impeach the then speaker, Ghali N’abba?

“Under whose administration was the out-of-court settlement in the ‎controversial $1.09 billion Malabu oil block initiated in 2006?”

The Ekiti State Governor also said that Obasanjo coerced state governors into donating N10 million each to the building of his presidential library in Ogun State while he was president.

“Isn’t compelling state governors to make donations to the personal project of a serving president part of corruption?” he asked.