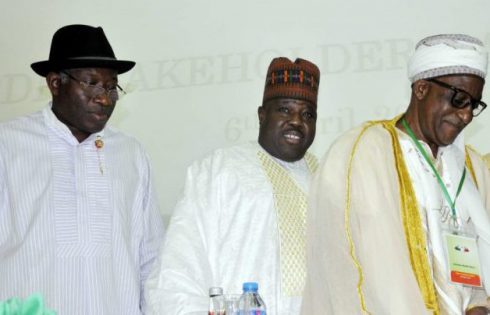 The plan by elders of the People’s Democratic Party to broker peace among warring factions has reached another deadlock; this time, Ali Modu Sheriff, chariman of the PDP, has expressed his disinterest in meeting with former president, Goodluck Jonathan.

Sheriff also said he is no longer interested in any forum that seeks to mend broken bridges in the party. He also noted that his reason for not wanting to meet with Jonathan is due to the former president’s inability to follow the recommendations made by the reconciliatory committee.

Sheriff said that the last forum that was organised to restore peace within the party was an insult to his office as he was not properly acknowledge.

He also said that he would not involve himself either directly or by proxy to the 40-man committee Jonathan had promised to set up in order to organise a reconciliation in the party.

“We will never attend any peace meeting to be called by the former President on reconciliation anymore. No. Never! We won’t go there. We are no longer interested in such reconciliation.

“We will not attend any other meeting to be called by him. We would cut off every leprous hand in the party. The former President can only chair a committee on his private foundation, not that of the PDP when we have a national chairman.

“We are not happy with the way he handled the failed meeting on Thursday. He did not respect the Court of Appeal judgment which pronounced Sheriff as the national chairman of the party.

“He (Jonathan) has no legal backing to chair PDP Stakeholders’ meeting when we have a sitting chairman. The former President does not have such a right. The failed meeting had scattered all the good works achieved by the Dickson committee.

See also  We have no mandate to zone presidency, other political offices – PDP Committee

“We hail our governors, except the duo of Nyesom Wike and Ayodele Fayose of Rivers and Ekiti states respectively, who worked against the meeting.”