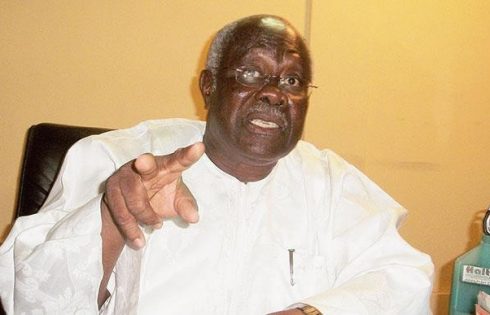 A chieftain and founding member of the Peoples Democratic Party, Chief Olabode George, has said that the party is on the brink of collapse.

In a statement released on Tuesday, George noted that PDP has lost its focus and consequently on the path towards desctruction.

A founding father of the Peoples Democratic Party, Chief Bode George, on Tuesday, said that the opposition party had lost focus.

“As I see it from my own personal prism as one of the leaders of our great party, we have lost the focus and the vision that once earned us high praise.

“There is confusion everywhere. There is no semblance of clarity anymore. There is no visible and acceptable guiding momentum to move us beyond the cliff of disaster.

“It is as if we are all frozen in a grand confusion and imperiled by our own collective contributions to the present crisis.”

George admonished the party leaders to tow the path of peace and bring all members under one house in order to salvage what is left of the party.

“There are too many appealing choices. But we must stand up firm and fast. We must make a stand to confront the many maladies now confronting our party. We must be counted to be on the righteous and the redeeming side of history. We must take the hard and the most enduring choice.

“We must never shy away from the bitter truth. We must talk to one another with sincerity of purpose and with constant purity of focus. There are no pretenses anymore,”  he said.

George also said that it is important that a spirit of discipline be entrenched among members in the party.

“We have derailed in a mournful way from the guidance, the nuance and the formative directions of our founding fathers. We have upturned and disturbed the normal building blocks and the structures of an orderly organisation.”