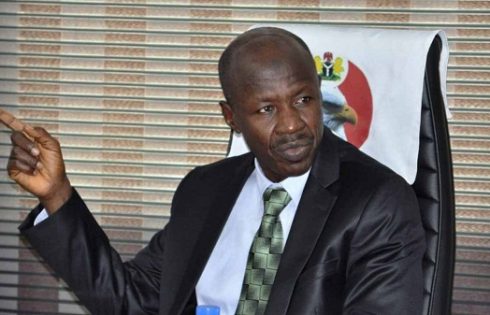 Nigeria’s President Muhammadu Buhari has been advised to let Ibrahim Magu remain in office indefinitely following the latter’s rejection by the Senate.

Magu, who is in acting capacity as Chairman of the Economic and Financial Crimes Commission, had his confirmation rejected by the Senate on grounds of allegations levied against him by the Department for State Security a couple of days ago.

Among other allegations by the DSS, Magu had reportedly breached certain security measures during his previous service in the EFCC and in the Nigeria Police Force, which, according to the DSS, were grounds for his ineligibility to serve as EFCC chairman:

“[In] August 2008, following a search at his residence during the tenure of Farida WAZIRI (AIG/Rtd) as the commission’s chairman, some sensitive EFCC documents which were not supposed to be at his disposal were discovered. He was subsequently redeployed to the police after days of detention and later suspended from the Force. In December 2010, the Police Service Commission found Magu guilty of “Action prejudicial to state security, withholding of EFCC files, sabotage, unauthorised removal of EFCC files and acts unbecoming of a Police officer,” and awarded him severe reprimand as punishment.” – Department of State Security

In spite of his [Magu] non-confirmation, Prof. Itse Sagay, Chairman of the Presidential Advisory Committee Against Corruption, advised Pres. Buhari that Magu can serve indefinitely in his acting capacity.

Magu had been serving as acting chairman of the EFCC, pending confirmation as substantive chairman by the Senate which was denied multiple times.

In a report published in one of the dailies, Sagay told the media that `removing Magu from office due to his non-confirmation will stall undermine the anti-corruption campaign by the presidency.

“I had a telephone conference with all members of the Presidential Advisory Committee Against Corruption and we unanimously agreed that Magu is the best candidate in this country for that position and that he should continue acting indefinitely until he is confirmed and there should be no change whatsoever, otherwise there will be a major setback in the fight against corruption.

“We observed that those who do not want him are those who are opposed to the fight against corruption. So, we are 100 percent behind him.”

The President, through his Special Adviser on Media and Publicity, Mr. Femi Adesina, however, stated that it would not respond to the rejection of Magu, pending a receipt of an official memo on the matter.

“The Presidency will respond to the non-clearance of Magu as EFCC boss after it receives official communication in writing from the Senate,” Adesina said.

By our reporter/ Abdulmalik Tanko, a teacher arrested over the murder of Hanifa Abubakar, a five-year-old pupil in Kano, has narrated how he killed…

Chidi Tony/ Akwa Ibom State internal Revenue Service said it is targeting to generate  over N43.8bn as it Internally generated Revenue for the 2022…

An SS2 student of Elkenemy College of Islamic Theology in Borno, identified as Ahmed Umar Goni, allegedly used a razor blade to slit the…

By our reporter/ Heavily armed Gunmen on Thursday night kidnapped Otokito Federal Oparmiola, the Bayelsa state commissioner of trade and commerce. According to an…